Investigating trends and characteristics of animal-vehicle crashes in Wyoming

Animal-vehicle crashes (AVCs) are a severe concern in the United States as well as in Wyoming. This study investigated the current trends of AVCs and crash rate per vehicle miles traveled (VMT) for the State of Wyoming using police-reported crash data for ten years collected from the Wyoming Department of Transportation (WYDOT). The study also examined different driver, vehicular, roadway, and environmental conditions related factors that had a strong association with AVCs. The logistic regression model was developed to check how the factors prevalent in AVCs influence the severity of AVCs. The results showed that the percentage of AVCs to that of total crashes ranged from around 15% to 22%. Among different animals involved in crashes, the majority were deer. AVCs were found to have two peaks: dawn and dusk. AVC rate was found to be the highest in November. Also, dark and unlit conditions had a strong association with AVCs. Most of the AVCs tended to occur when there were no adverse weather conditions. When the speed limit was examined, it was found that the AVC crash rate tended to increase when the posted speed limit was higher than 60 mph. AVC rate was also higher when the road surface condition was dry. Higher posted speed limit, younger drivers, and dry road surface were also found to increase the severity of AVCs. The results identified in this study will be helpful to identify effective countermeasures to reduce AVCs in Wyoming. 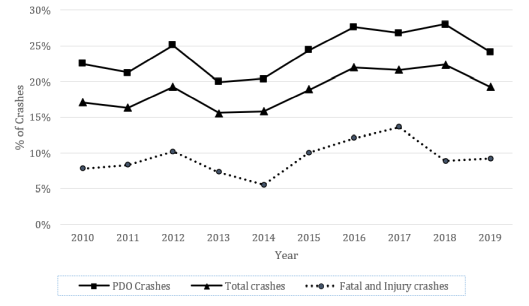 © 2016-2021, Journal of Sustainable Development of Transport and Logistics. All Rights Reserved.