This study examined the travel behavior of commercial public transport passengers in Lagos State, Nigeria. The descriptive research survey was used in order to assess the opinions of the respondents using the questionnaire. A total of 84 samples were used as representative population, while two null hypotheses were formulated and tested using the Pearson Product Moment Correlation Coefficient at 0.05 level of significant. The results that were obtained indicated that a positive correlation exists between frequency of   travel and commuters income in Lagos Metropolis and also that a positive correlation exists between frequency of travel and distance covered by commuters in Lagos Metropolis. Secondary data was also sourced to serve as complement to the primary data, thus allowing for a robust research. Descriptive statistical tools such as percentages were also adopted to present the socio-economic characteristics in the area. Findings showed that about 57% of sampled population are male, 62 % are civil servants, 48% of respondents travel for business purposes. Also, that majority of the respondents (50%) said that the commercial public transport is highly prone to accident, while about 64% of the respondents commute on daily basis. It was established that lack of transport infrastructure coupled with poor road maintenance were seen as the leading causes of inaccessibility of the area. 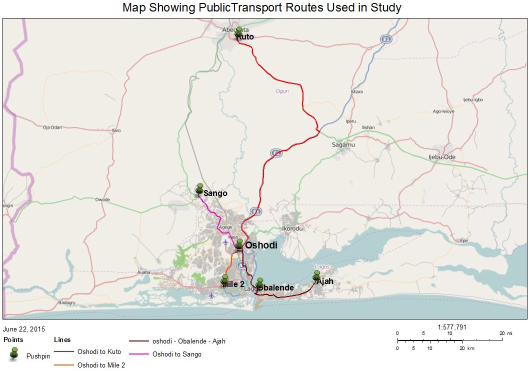 © 2016-2022, Journal of Sustainable Development of Transport and Logistics. All Rights Reserved.