This paper uses network-based efficiency measures to evaluate the efficiency implications of the evolution of the transport network in the Pearl River Delta (PRD) over the period 1988-2008. The network-based efficiency measures consider the relative ease of access between cities in terms of weighted relative travel cost. The results indicate that the spatial patterns of network efficiency are different from ‘core-periphery’ pattern derived from classical accessibility indicators. This implies that there are low network efficiency cities and high network efficiency cities in core and peripheral regions at the same time. In the first stage (1988-1998), the efficiency contour shows a ‘corridor’ pattern along the GuangShen traffic corridor between Guangzhou and Shenzhen in the eastern side of the Pearl estuary; in the following decade (1998-2008), with large-scale infrastructural developments, the spatial pattern has changed from a north-south corridor to an east-west contiguous distribution pattern. By 2008, the mean network efficiency value indicates that the efficiency levels within the PRD as a whole are tending towards optimal levels. We conclude by suggesting ways to promote the urban economic development based on the relationship between the network efficiency and per capita GDP. 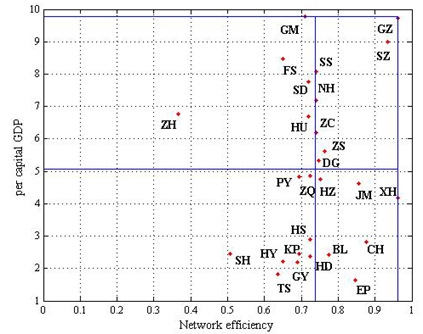