Decoupling of economic activity and freight transport volume: An evidence for short sea shipping future in the ECOWAS sub-region

This paper explores the decoupling trend between GDP and freight volumes in the ECOWAS states to develop short sea shipping model for the ECOWAS sub-region aimed at reducing the cost per transported unit within the sub-region. The research is based on cross-sectional data from ECOWAS countries spanning from 2000 to 2013 and sourced from the ECOWAS Commission and National Bureaus of Statistics of some member countries. The data were analysed using arc elasticity which is a transport demand modelling tool, to determine the level of variations among trade volumes in the ECOWAS sub-region. It was discovered that total freight volume improved proportionally with growth in GDP for most of the periods in the ECOWAS member countries. This is confirmed by the coefficients of elasticity close 1 or higher than 1. In certain periods, however, the coefficient of elasticity of total freight volumes was found to be approximately zero, thus, indicating that considerable potential freights were lost. More stable values have the coefficients of general elasticity below 1. In most of the ECOWAS countries, the coefficients of general elasticity are unstable, both negative and positive values have a range of values (from -43.709 to 52.364). Hence, freight traffic volume and GDP in the ECOWAS region is highly decoupled.  This has raised a serious question as to the prudence of continued dominance of road transport mode for intra-regional freight movement in the ECOWAS sub-region. The result of the study revealed a strong correlation between GDP, the population of member states and the volume of freight in the ECOWAS member countries. The research also showed that the development of short sea shipping model in the sub-region would depend considerably on growth in GDP, improvement in the productivity of the population and increase in seaport corridors of the ECOWAS sub-region. 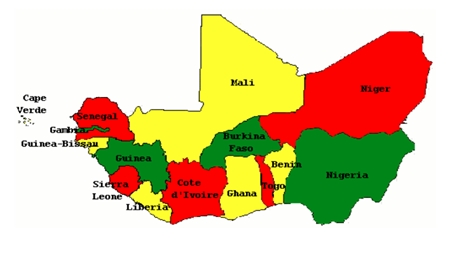